When I was searching for a breed, which I was going to buy as a substitute of a Tibetian spaniel, I was charmed with small pugs. I was quite captivated that they are told not to bark much, they rather only foreshadow barking. My small Tibetian spaniel bitch was called “barkleader”, somebody in the street just sad few words, rang the bell or something just brushed along and she immediately started to bark as mad and she also made the bassets in a yard bark. Since our neighbours who live next doors are cretins and they dislike dogs (even just by sight), it was discomforting. That was the reason why I was looking for something different. I used to considered a pug to be a slowly, calm doggie who only keeps sitting a breathing in a corner on a cold place during summer. So they seemed to me at least when I was gazing on them the exhibition.
God, how wrong I was. When the small pug came to us we found after a few hours out that it was something we hadn’t have here before and we were just staring.
The small pug is a devil quilted in a dogskin.
Every ordinary puppy runs for a half an hour and then sleeps for three hours. Šerynka slept for a half an hour and she raised hellas hand of a plague. And so she went still round and round in circles. She completely washed us out and then she looked about for another prey.
My colleague from work came to us to have a look at the dog and she immediately named the dog after Fitipaldi. The pug pounced her, she ran throw the corridor. From the middle of the corridor she began to break using her flank. She slid towards my colleague on her bum and climbed my colleague’shead and there she enthusiastically tore her hair. She is good at trimming.
Within less than a month the pug ruined the antique furniture. The flower she couldn’t reach according to my opinion was knocked down and scattered all over the kitchen by the dog. Simply ‘darling’. If I had bought the dog on my ownwe would have to pick up our traps after 14 days and leave home. But because the dog was bought half by my husband and half by my son theydid as if nothing had happened.
A friend of mine told me that two pugs went to jump agility to a drill field. If she had told me that before the purchase I would have never believed that.
Šerynka runs in a yard as mad and every day she completely washes out two BASSETS. Her first prey is Werunka and after she gives her the finishing blow she runs amuck on Lesíček and gets to grips with him. She tires dogskin on a neck, ears, she also tires sands, tail, no matter anything. I wonder that Lesíček is patient enough, it is a 5-year-old dog. Werunka is still a mooncalf. She keeps distance to another dogs, they are not well disposed for her games. She is runs around Prim in a safe distance, she runs in curve eight around him and stares like at tennis, dully from right to left, now and again she indicates an assault. Lesíček would like to catch her, but he has no chance. Najty dislikes her and Šerynka knows that. But once she nipped on her tail by mistake. That was a horror, Najty nearly had haemorrhage because of that, she sprang half metre in the air and nearly strangled her. Now Šery first take a view of a tail to nip on to know whose stock it is.

Choice of a pray

Pray is chosen, he will gape what I can

I’ll tear him to peaces

He is telling some bilge, I’ll strangle him like a rat 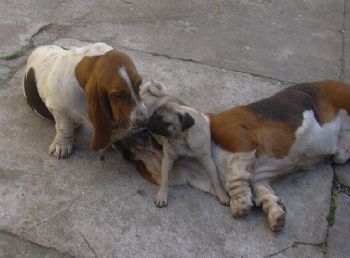 He has enough now, what about the other beast 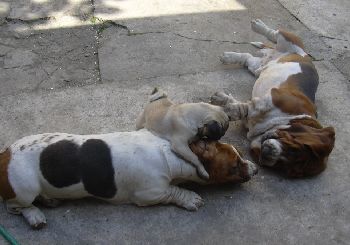 Yes, she was cheeky, she’ll get it warm

The puppies are funny. They are four now, they already weight 9kg. When I first let them come to Šery, they ran amuck on her at a blow and in this moment she was defeated and lay on her back as a beetle PYTLÍK. Because she is a smart dog-girl, she made out a trick. She lures away one puppy form the pack by skipping and jumping and then she gets to grips with this puppy and washes it out. Then she goes fetch another puppy to do the same with it. We have a free of charge cinema. With Julinka it is worse, she is 6 months old and I call her bull in a china shop. She is so lanky and an unfledged cub as for her behaviour. Simply a hebetic dog. Šerda also tries to incite her, but it is equal here, a draw. Šerda directly tires her muffle, he knows it is where it pains mostly, but Julka doesn’t put up with it so easily. She clutches her leg or paw or even a dogskin and pulls her (while skidding) throw the yard. Strange. It must cause pain to both of them but they both gamely keep and dally with each other almost daily.

When we walked out to firs exhibition it was an experience. So many dogs. Šerynka was in trance and the bigger dog the more she went off at the mouth. I had to tamer her damn much. I dislike this. When we then made an extraordinary trip by bus to , she chose a Tibetian bandog that was quite dangerous and was about to scoff her or at least to nip on her ankle. She couldn’t understand that in that case it was a risk to life. Well at home it is possible to scourge the beasts (quasi the chosen ones) composedly. Why is it impossible here? What the oversized skunks actually think they are? I am though a molos-shaped doggy, so I am a king.

On the fall of 2008 we had our first puggies.
Šerinka was really good mother but modern, too. From the fifth day she slept in a bed at night again and I had to move puppies to her by myself. Doggie Arny, we called him Jožinek, was chosen as the Christmas gift for our kids. You can see in the text of e-mails what kind of a gift was it, as I was being informed about it. According to my opinion it was the most beautiful gift kids ever got. 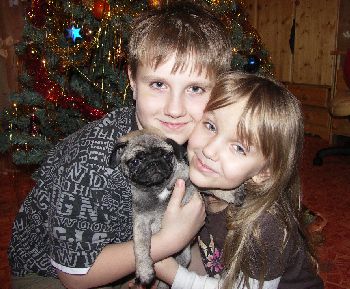 Good Christmas Eve!!
So present was gifted!!! It was indescribable!!! Before they arrived from you I took a walk with kids so they couldn’t notice a thing. We immediately had a dinner after that. Jožinek was doing OK in his travelling bag where he obviously liked it in the meantime. He made there a den, ate half bowl of granules and was going to take a nap. Only thing I noticed is that he is drinking just a little water.
We let kids to unwrap gifts afterwards and then we put him with blue ribbon under Christmas tree so that nobody noticed. At a first moment there was a silence as nobody was moving – not kids nor even the dog. They thought that he is a plush toy! First one to move was Anička and she run towards him. Jožinek started to run away and I’m not surprised. Daneček grab his mouth and even his breath might have stopped for a moment, well I thought that he is going to get heart attack. Joy was great!!!
The most beautiful present
Jožinek received „igloo“house and now he is sleeping there. His most favorite place to sleep is on a lap or behind a neck, though. So familiarization is over and I hope that he gets used to us quickly.
I’m writing some more information about Jožinek .. everything is as I expected – he is sleeping with us in a bed! Tonight he sneaked into a bedroom where he was trying to get some attention by loud snuffling. So I took him into the bed and in next moment he fell asleep till morning … with one fall from the bed. He was watching us in the morning and when he noticed that our eyes are open he run towards us and washed us and even dried us perfectly.
He is peeing on an underlay which is good and we approve it. Anyway, he is a fighter and total demolition dog. When rested, he is raging and only chance to escape from him is to jump somewhere out of his reach. I’m starting to teach him because he might eat Anička. He is respecting me as he is feeling family hierarchy. But he has chosen Anička as a target and he is ripping trousers and T-shirts from her. He is always growling and he even bit her. This was his first lection for proper behaving. Then he was sitting and looked like a sweet toy with innocent look of an angel … but he bit her never more. He is really smart. Now he is resting in Daneček’s duvet and he looks satisfied.
We were falling asleep with the dog in the bed once and my husband made me laugh by saying that there are two kinds of dog owners. First one say that a dog is sleeping in their bed and second ones are lying.
These masters I wish to all puppies. Not always does this happen.